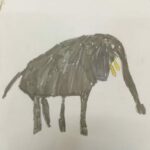 The set subject is to create and build a very large recycled elephant, made from the junk and scraps they bought in for this project. The children would be then grouped and have them choose different parts of the elephant which they would be responsible to make. But before all that the children viewed different pictures of African elephants from the net, then encourage them to draw their interpretation of  an elephant.

The children would have to keep in mind, the long trunk, large ears, a big round body four legs not forgetting the tusks. We had a look at all the drawings keeping note whats involved.

We had a rummage through the junk and decided to start with a large box for the body and build up from there. 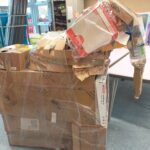 The children who wanted to make the legs, used plastic water bottles, card from cereal boxes and bound together with tape, sellotape and the use of a glue-gun (teacher guidance) making it quite strong.

The glue – gun helped to bond parts together. The body started to develop and more and more scraps were added and taped on to it. We found it needed some more support so it was decided that cling film could help to tighten up the parts more firmly. Once we did this, the children making the head using boxes and tubes placed the head on to one end of the large body and stuck with tape and glue gun. Cling film was wound round and round until it got stuck firmly.

We then tilted the body to one side, and we gouged out four holes to push the elephants legs into it.  Aligned equally and taped and cling filmed many times. The hole were stuffed with scraps of card to tighten the hold. Plastic cup cake holders were used for the elephants ears, and two plastic water bottles for the tusks. The trunk was made out of a plastic water bottle and a cardboard tube. 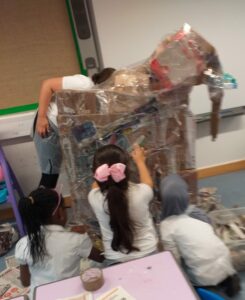 Our next mission was to papier mache’ the whole body, using watered down PVA glue and cut up newspaper in strips (here we are recycling newspapers). From then on the children pasted glue on the news paper and cover the elephants body with it. This will continue, week by week and I will keep you posted and updated in its development. Once it has had enough covering of newspaper and is solid. The children can then decide how to finish it off. This could be a choice of either painting it or using more colourful scraps of paper and maybe glitter.

So watch this space!

Hello again! a few sessions later and now a much more solid elephant, the children decided to paint it with a blend of colours creating a turquoise. Mixed with PVA glue to give it a finish sheen and set the paint, sticking any loose newspaper. Together we will continue to paint the elephant until the colour covers up the newspaper. From then on a decision has to be made on whether additional coloured paper should be used for effect or to glitter it all over.

The eyes have been left as the last bit of work to attach on the head of the elephant. The children will do a few samples of eyes and see which ones suit the elephant.

Here are a few pictures showing how the elephant is looking. By the way we were all trying to think of a suitable name for the elephant and because he is made from junk or scraps, we came up with ‘Scrappy’ for its name.

To make the elephant it took a number of weeks, as the Art club is only once a week and each session is approximately one hour, so Scrappy had to be left to dry in between sessions. This project will be featured on the school website so parents can see what we do in our Art clubs, highlighting the fact that it was made our of ordinary junk and scraps that everyone throws out. Scrappy will be put on display in the reception foyer, where parents and children will get to see our children’s creation! When this is set up I will feature a photograph showing this.

All children doing this project had lots of fun, they worked well together and talked amongst themselves sharing ideas on what to do next to make Scrappy looking more fun. This activity got children to interact and help each other using art resources and tools. We talked about the colours to use and whether it really needed a sparkle or not. The hat was an after thought and made the elephant look a bit funky! This was made out of a sweets container lid and half a plastic water bottle.

We have started to down size and are currently making smaller elephants out of plastic milk cartons. Each child will get to make their personalised version. When these smaller elephants are completed its been suggest to put them around Scrappy. Its a thought. I will feature how these elephants are made with still shots soon, or even a video.

This is an on going project updated as we progress with the task in hand. We have discovered how to use all sorts of junk forming shapes that demonstrate different parts of an elephant and then binding them together. Working on a grand scale getting children to work in a team and express the freedom to cut stick paste and bind prepare colour and apply in what ever way they can allowing them to think for themselves.

So there you have it watch this space for further updates.

Hello again, after 4 months of, cutting, gluing, sticking, binding, piling, attaching, painting and made with great compassion, dedication and love, the children completed a not too bad replication of an truly loved animal and were surprised what they could create with a little imagination, out of junk.

To my surprise the children are thinking maybe for the next big one……… an ALLIGATOR!!!

Voila! here is ‘Scrappy’ displayed in the school foyer, attracting a lot of attention! Hiding amongst the plants is a very unusual creature, resembling an elephant. Questions asked ‘where did it come from?’ ‘Is it dangerous?’ ‘Beware strange species amongst us!’ ‘How did it get here?’ The good thing is parents are wanting their children to get involved in this kind of project.

So we have success and our kids are proud of it. Lets show respect for our environment and make use of our rubbish, we play a big part in recycling, look what we can create! and think twice before you throw out your scraps.